Using GIS techniques in the research on in/security understandings, practice and impact in the context of the Colombian armed conflict

I am applying geographical information systems (GIS) techniques in my research on security understandings, practice and impact in the context of internal armed conflicts. My aim is to capture the diverse spatial conflict dynamics of the Colombian armed conflict, and to examine the vertical and horizontal relationships within society. I am particularly interested in the relationship between local conflict affected societies and government security policy and practice.

GIS techniques can facilitate both aspects. To harness the potential of GIS, issues of data completeness and data quality need to be addressed. Indeed, a main drawback for the use of GIS in conflict-related research is that spatial data for many driving forces of conflict are not yet easily available at the required scale and quality. Spatial data could include conflict location and diffusion (e.g. geographic location of conflict area), population distribution (e.g. population density and growth), inequality (e.g. ethnic, economic and social fractionalisation), environment (e.g. land degradation, roughness of the terrain), and natural resource availability – to name but a few.

Fortunately, Colombia is a particularly interesting case to research due to the availability of good quality sub-national datasets on conflict dynamics. While there are several datasets available for researchers, ranging from datasets provided by different UN agencies, to national peace observatories and private research centres, in my research I rely on data provided by CINEP (the Centre for Research and Popular Education/Peace Program), a Colombian non-profit foundation. CINEP has collected statistics on political violence since the 1980s with the purpose to provide a detailed documentation of political violence in Colombia.

CINEP distinguishes between four kinds of political violence: human rights violations, violations to international humanitarian law, bellicose actions and social political violence (CINEP, 2008). Human rights violations, violations to international humanitarian law and bellicose actions adhere to internationally recognised definitions and thereby only includes acts perpetrated by the guerrillas or the state. Social political violence on the other hand include acts committed by groups not part of the armed conflict, as long as the act has a clear political or ideological motivation.  Within these four kinds of political violence, the dataset distinguishes between 15 different categories of crimes (intentional homicide, torture, injury, attack/ambush, sexual violence, threats, forced disappearance, abduction, arbitrary detention, deportation, hostage taking, child recruitment, human shield, kidnapping, and confinement). Where possible the perpetrator of each crime, or group intervening in the crime in the event that it did not cause it, is identified. The reason for relying on the CINEP data is that it is the most complete and accessible dataset on in/securities and it has also been positively assessed by a number of scholars for its objectivity.

The use of GIS for exploring how in/security is understood and practiced, and the resulting implications, in the context of the Colombian armed conflict is threefold. First, GIS was used to help identify the geographical sub-national research sites. Relying on large datasets on conflict-related violence, GIS greatly facilitated the identification of in/security hotspots. While CINEP data stretches back to the 1980s, I cover the period 2012 and 2014 in order to give an overview of the current situation. 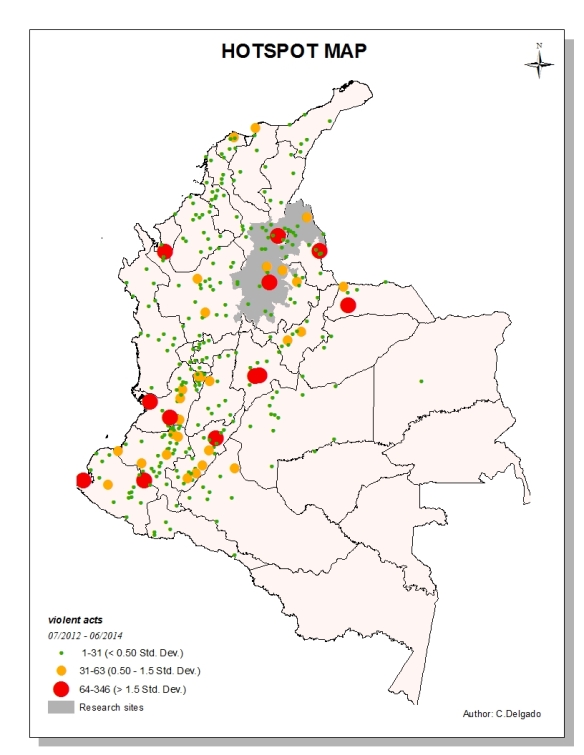 Using ArcGIS software, maps have been created for each category of insecurity (see image above). These maps were then layered to give a graphic overview of where insecurities tend to cluster geographically. With the number of incidents ranging from one to 678 events per municipality, the standard deviation distribution of data (insecurities) was used and mapped to allow identifying regions with particularly high incidents of violence. Through this process, the Magdalena Medio and Catatumbo regions were identified. Thereafter, qualitative research captured the articulations of in/security as expressed by the local communities in the selected research sites. Secondly, GIS was used to visualise the geographical priority regions of national security policy and practice. Qualitative research thereafter interrogated the implications of such policy and practice in the selected research sites. Finally, GIS was used to illustrate the geographic overlap between security related policies, peace-building initiatives and economic development priorities. These illustrations helped inform analysis of the contradictions between state-level security understandings and practice, and how communities experience in/security at the local level.

Applied in this way, using GIS techniques helped bridge the state and local levels on the one hand, and on the other the use of quantitative and qualitative data.